Following the successful debut of the all-new 2017 BMW 5 Series Sedan in Europe and announced for the market in February and March, respectively, the German based carmaker is also testing out the top of the line F90 M5, seen in the spy video below, while undergoing tests in Los Angeles, US, and wearing full camouflage.

Even if the camouflage hides the most important details that the new M5 will be coming with, we could still depict the areas that would receive noticeable changes.

The F90 BMW M5 wears the overall design of the 5-Series Sedan, but will come with its own personal feel and touch, accentuating its aggressive look and styling. We are looking here at a much sportier front-end, adding twin-double pipes at the rear, as well as the flared wheels.

One of the car`s main highlight is no doubt – just like the M550i xDrive – the imposing kidney grille, now coming thicker and complemented with the new LED headlights. The aero flicks in front of the wheel arches also provide the model with a distinctive look.

Under the hood, the all-new F90 BMW M5 will receive upgraded mills, fully packed with the same high-performance V8 TwinTurbo technology, which would bring the model to its highest peak of 500 horsepower, which would be rather the same as the M4 GTS.

Also, for the first time, the company will add the long-expected all-wheel drive system, which will also be present on the future M6 models. The new system will improve the car`s driving dynamics offering a sporty feel and increase grip at the same time.

Full details will be known prior to the car`s unveiling at the 2017 Geneva Motor Show. Meanwhile, take a closer look at the spy video with the future F90 BMW M5 going for full tests! 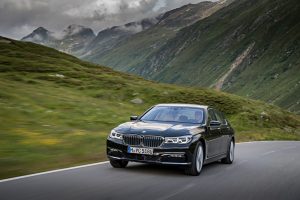 Next post BMW`s Portfolio for 2016 L.A. Show Is Really Impressive