Representatives from the German luxury manufacturer have confirmed that BMW X4 will be officially unveiled at the 2014 New York Auto Show which is due next month.

The BMW X4 was rendered in some spy shots just a while ago, and now, the smaller SUV is getting its final touches for the event.

The BMW X4 shares its platform with the X3, also borrowing some body style tweaks from the bigger X6, like a fresh front fascia with a more aggressive grille, twin headlights or bigger fog lights.

The BMW X4 is definitely bigger than the X3, being approximately 14 mm longer and 36 mm lower, but sharing the same cabin.

Concerning the power under the hood, the model comes with an engine lineup, as the model is enhanced with three diesel engines and three petrol units.

Thus, customers may choose between 190 horsepower and 313 hp for the diesel models, and 184 ponies to 306 horsepower for the petrol engines. 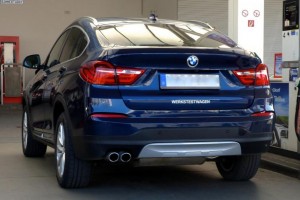