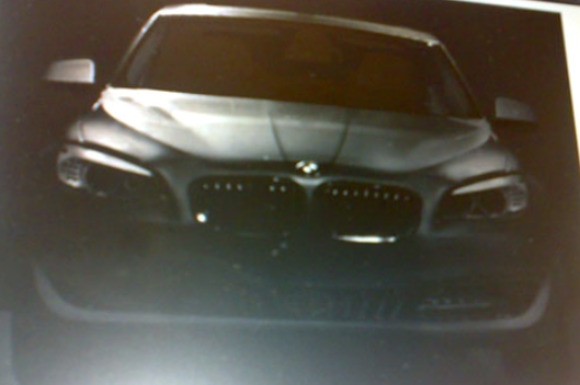 A few days ago we talked about the official appearance of BMW 5-Series GT (Gran Turismo). Now we have a leaked photo with next generation BMW 5 Series codenamed F10 and we don’t know if the car will look same as in the photo.

In a article about the next generation BMW 5 Series’ front bumper that we posted it a few months ago, we said: “This is the only picture that leaked from BMW and it is surely the genuine front bumper of the new 5 Series.” – Yes, now we can see that in this leaked photo, the 2011 BMW 5 Series has same front bumper.

2011 BMW 5 Series will give a new interior design and new exterior changes such as the use of panels of lightweight aluminum body, a revised front suspension uses control and a slight increase in wheelbase.
This car borrows elements from BMW CS Concept and will have a V8 twin-turbo engine that is found on BMW X6 and will be possible to be available the V6 twin-turbo engine found on 335i and 135i.

The car will be equipped with a 8-speed automatic transmission, will also have Park Distance Control and a video system around the view.

Next generation BMW 5-Series codenamed F10 will be unveiled at Geneva Show in March and also we will post photos and new details about it next days.

Please don’t hesitate subscribing to our RSS Feed for giving news about the cars from BMW.

Thanks to ExpertMotor for information.

Unveiled in March this year, at Geneva?

@Daniel – It’s not sure, but we think that next generation BMW 5 Series will be unveiled at Geneva Motor Show in March.