There are probably few models from BMW that have lately received the best attention and appreciation, and one of them is the G30 5-Series, an exceptional ride in all its forms. However, there is also the M550d xDrive that follows its footsteps with magnificent styling characteristics and impressive power under the hood, which for a diesel, is a real treat.

Both available in the G30 (Sedan) and the G31 (Touring), the 2017 BMW M550d xDrive has now become extremely practical, offering advanced visual characteristics, impressive interior design and worthy performance under the hood.

Speaking of performance, the new M550d is equipped with a tri-turbocharged 3.0-liter straight-six, which has received no less than four turbos, making it the most powerful six-cylinder diesel in the world. This means that the model develops 400 horsepower, available at 4,400 rpm, and whopping 760 Nm of torque, available at as low as 2,000 rpm.

All the power is sent to the wheels via an M-Performance eight-speed automatic transmission, allowing the Sedan a sprint from 0 to 100 km/h in just 4.4 seconds, while the Touring runs the same straight line in 4.6 seconds. Both at a top speed which is electronically limited at 250 km/h.

Even with the impressive power and mind-blowing torque, the G30 Sedan and G31 Touring are coming with impressive fuel consumption as well. This means 5.9L/100 km and 6.2L/100 km, respectively, while the CO2 emissions are also standing at 154g/km / 163g/km.

As for the exterior visuals, both variants are looking fresh with the M goodies around the front and rear, side sills, boot spoiler and so on. Other important characteristics also refer to Cerium grey paintjob on the kidney grilles, door mirrors, adding as well 19-inch alloy wheels and optional 20-inch alloys. Inside, the cabin has also received the “M550d” embroidery, leather and Alcantara and aluminum trims. The M signature is also visible on the steering wheel, pedals and so on.

As for the prices, BMW will announce the official details in the incoming weeks. Unfortunately, the 2017 BMW M550d xDrive in both its forms will be only offered in Europe. 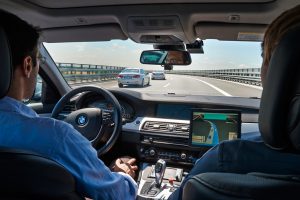 Next post Is BMW Ready for a Driverless World?