More and more tuning programs with the recently unveiled BMW M2 Coupe are popping on the web, and the latest comes from Manhart tuner, which has created the “MH2 450” tuning kit for the hot coupe.

Mind that these are not just simple renderings, as the aftermarket shops will carry out their programs on the 2016 BMW M2 Coupe, once it will be released on the market next year.

This BMW M2 Coupe MH2 450 by Manhart has received a carbon fiber kit, with the new front spoiler and bumpers, side skirt, sport vented hood or customized diffuser.

The model also looks gorgeous with the two-tone exterior color and the Manhart alloy wheels, which provide the model with a sportier look. A new lowering spring has been also fitted, showcasing the Coupe with a greater stance.

But the real goodies are found under the hood, this M2 Coupe receiving a remapped ECU with downpipe and a sport exhaust system. The model is now packing 450 horsepower, which is quite significant from the stock 370 horsepower.

There are no performance figures nor prices announced for this special tuning program carried out by Manhart, but perhaps we should see it again in the upcoming period with some extra goodies. 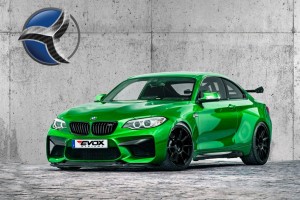 Next post Video: 2016 BMW M2 Coupe Tested on the Salzburgring