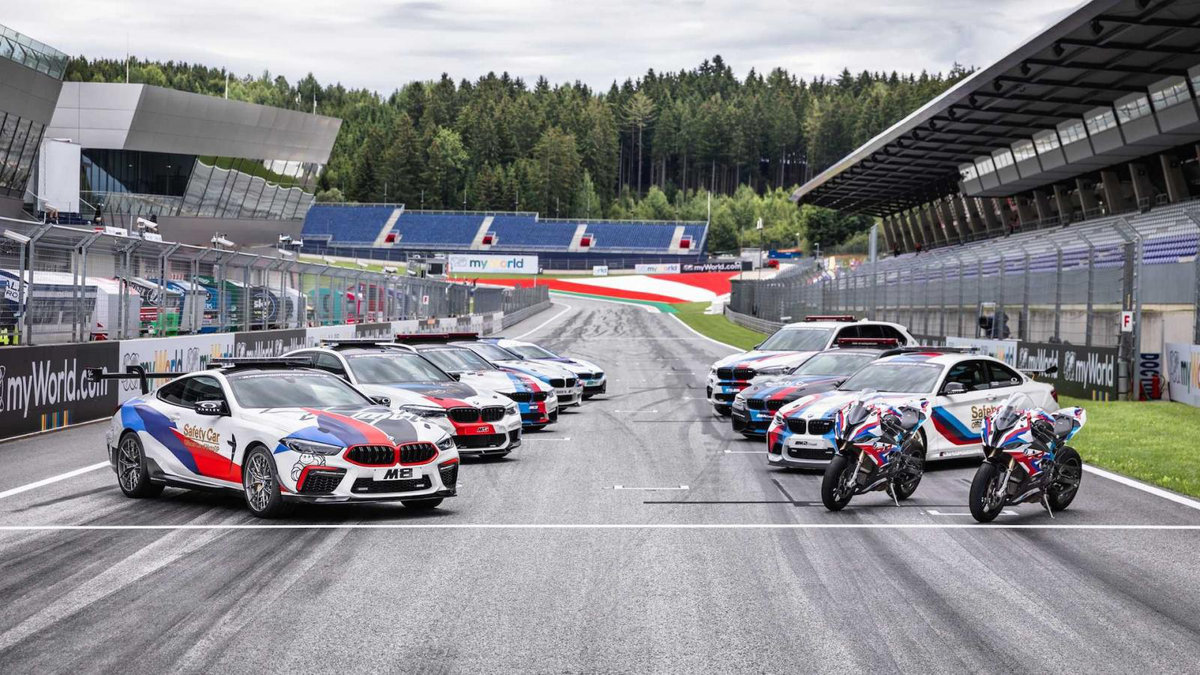 Anybody who turned into the recent MotoGP event in Austria might have noticed a familiar (but well decorated) car on the front row – the M8 Competition. It’s no sooner been launched than starting its duty as the chosen safety car of MotoGP events going forward, replacing the M5 in the process.

This year marks twenty years of BMW supplying MotoGP events with safety cars, and the company was never likely to allow the occasion to pass without a celebration of some kind. We can’t think of a better celebration than showcasing such a beautiful car on the starting grid – nor such a reliable performer to ensure safety on the track when the occasion calls for it.
In almost all ways, the safety car version of the M8 Competition is identical to the version of the car which you can drive on the streets. Under the hood is a twin-turbocharged 4.4-liter V8 engine capable of 617 horsepower, connected to an 8-speed Drivelogic transmission and the cutting-edge ‘xDrive’ system which enables all-wheel drive. At top speed, the car shows just as much racing form as the motorcycles around it! The car was secretly being tested on Germany’s Nurburgring before gaining approval for use in races, but has also undergone winter testing in Sweden to ensure that it’s capable of doing the job required of it in all weather conditions.

Despite the similarities, there are a few ways in which the safety car variant of the M8 Competition differs from the vehicle you can pick up from your local BMW dealership. The most visually obvious is the enormous rear wing, which it’s inherited from the M8 GTE. A purpose-built front splitter has been added, along with carbon side skirts, a rear diffuser, a specialized exhaust system, and of course the racing livery which makes it appear so distinctive. You wouldn’t find it as comfortable to drive as the street car though – the roll cage and the fire safety equipment within the car have come at the expense of some of the comforts and luxuries! 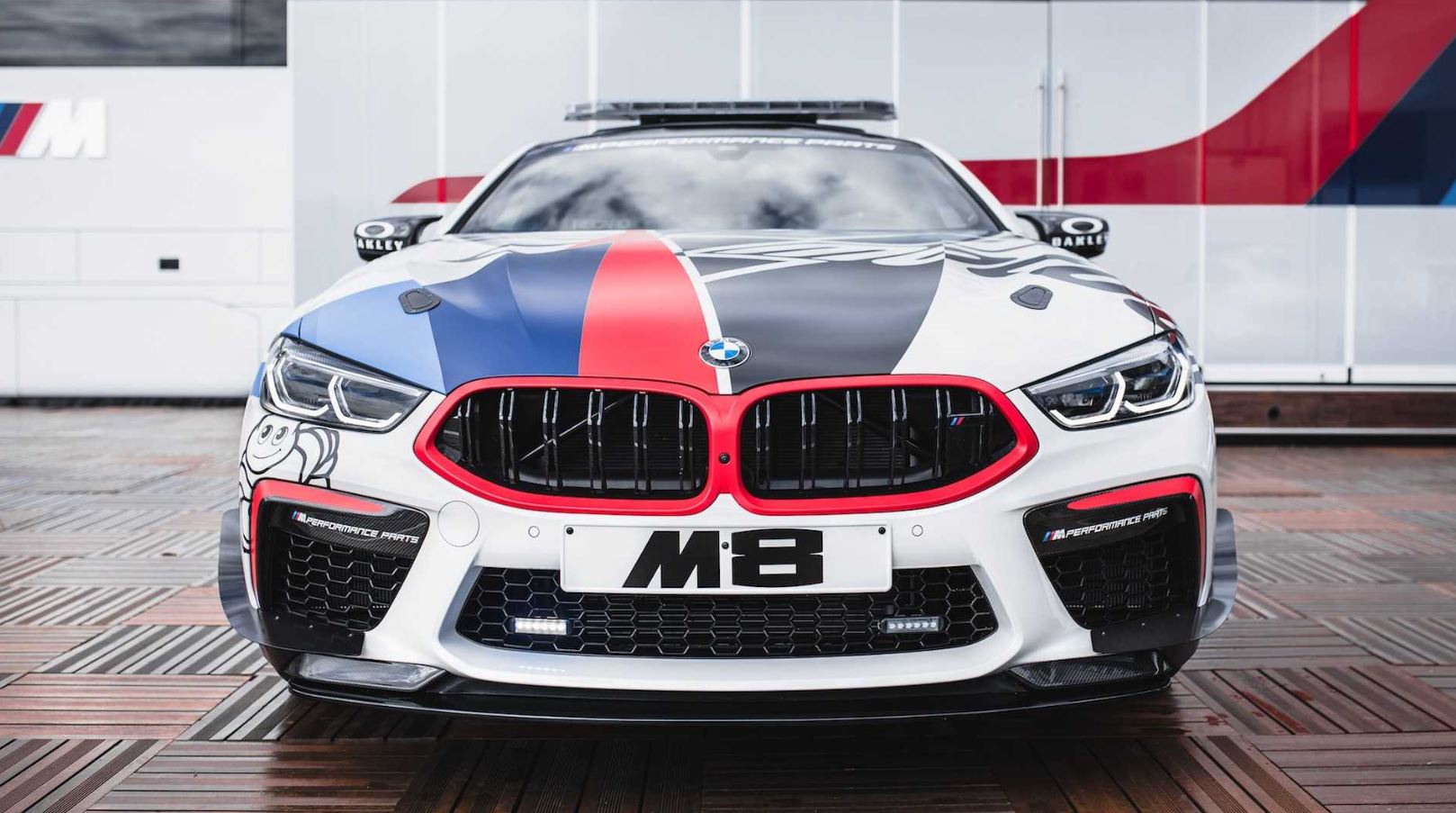 Although a safety car would never be required to accelerate to the same speed as a racing motorbike, the M8 Competition isn’t far off. The top speed of a MotoGP bike is around two hundred miles per hour. When the M8 Competition is pushed flat out, it can reach 186 miles per hour, going from 0-60 in 3.2 seconds. Thanks to the exhaust system which we mentioned above, if it were at top speed, it would sound as aggressive a racing vehicle as any of the motorcycles around it!

Markus Flasch, President of BMW M, was particularly enthused about the new safety car. He pointed out that the sharing of parts was made possible because the BMW 8 was developed at the same time as the BMW M8 GTE, and that the racetrack environment was both considered and tested upon at all stages of production. He believes that the car represents the most powerful safety car ever supplied for MotoGP events, but also vows that his team will continue to push for an even more powerful model next year.

The arrival of the new safety car comes at a crucial point in the MotoGP season, with the race for the championship hanging finely in the balance. The first race to feature the new BMW was one of the most nail-biting of the season, with Andrea Dovizioso waiting until the very final corner of the race to pass Marc Marquez and take the victory in Austria. It was only the second win of the season for Dovizioso, and keeps him within striking range of Marquez at the top of the leaderboard. Marquez currently leads by 58 points, and with a victory could have started considering himself the favorite to walk away with the title at the end of the season, but Dovizioso has everything to play for, and Marquez has been left to rue his last-minute failure to protect his lead.

With Danilo Petrucci now a distant third and with only one win all season, fending off Alex Rins down in fourth place by only twelve points, it appears that the battle at the top of the table has split into two groups of two – Marquez and Dovizioso fighting for the championship, and Petrucci and Rins battling out to see who’ll take the honor of third place. Behind them is a legend trying to find his way back into the fight. Valentino Rossi – who many people feel is the greatest motorcycle racing driver of all time, is in fifth. Rossi suffered the indignity of failing to score three times a row this season, with zero points recorded in the Netherlands, Spain, and Italy, and those failures have cost the 40-year-old icon any realistic prospect of taking the championship. Since then he’s been back among the points for the last three races in a row, and will be determined to finish what may yet prove to be his last season in the sport as well as he possibly can.

A resurgent Rossi would certainly set the cat among the pigeons further up the table – especially if he starts finishing between Marquez and Dovizioso. That’s why odds on who’ll finally come out on top have been so erratic with bookmakers; in some cases, you’d have just as much chance of predicting the outcome if you were putting your money into mobile slots instead of giving it to a sports bookmaker. Rossi may not have the sleek, sophisticated visual charm of a mobile slots game like ‘Light Racers,’ but he’s every bit as unpredictable as the next spin of the reels on any game you’ll find on a mobile slots website. If he gets the bit between his teeth and believes that the finishing line is in sight for his career, he’s unlikely to let the championship prospects of any of his rivals concern him too much. Motor racing, like mobile slots, comes with a jackpot prize – and Rossi will want to cash in before he heads off into the sunset.
If you’re a motorsports fan, you could do a lot worse than find a way to watch the final few races of the MotoGP season and see how it plays out – and as an added bonus, you know there will be a beautiful safety car to look at if it all goes wrong on the track! 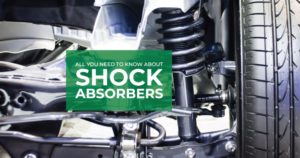 Previous post When Is It Time To Replace My Shock Absorbers?

Next post The Best Ideas for a BMW Road Trip