The all-new 2018 BMW X2 is popping up into the spotlights again in new spy photos, while undergoing some heavy tests out in the cold Sweden. The model is still wearing heavy camouflage, which indicates that it is far from being finished soon.

We already know the general details concerning the arrival of the new model. First of all, it will come with a lot of influences from the X2 Concept, but will add its own styling bits, which will make it extremely attractive and appealing.

Second, it will also stand on the same lightweight platform also underpinning the X1, meaning that will allow the use of lightweight materials. This also translates into more space inside and plenty of engines under the hood.

The exterior will look extremely evolutionary and high-end, highlighted by the a wider intake on the lower front fascia, adding more muscular lines, sloping roofline which announces a more rounder rear, wider taillights and bigger wheels.

Inside, the all-new 2018 BMW X2 will boast with the latest technology also available on the new 2017 5-Series or 2016 7-Series, including the latest infotainment system with gesture control, or the already-famous semi-autonomous system.

As for the engine lineup, this will comprise a wide range of powertrains, with different configurations in Europe and the United States. On the Old Continent for instance, the all-new BMW X2 will feature three- and four-cylinder petrol burners and diesels, while overseas, the SUV will be available only in petrol configurations.

As expected and already announced, a plug-in hybrid version is also in the cards, presuming followed by a more potent M versions. Prices and full details will be launched prior to the car`s debut in half 2017. 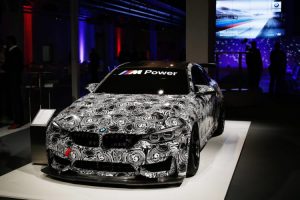