G-Power tuner is making slowly but surely its way up into the big aftermarket league with its impressive body styling and power kits fitted on different BMW models.

And last week they made a splashing job on the hardcore BMW X6 M, the model receiving the tuner`s impressive three-stage power kit, with power up to 750 horsepower.

The technicians are back with another outstanding project on an M6 Coupe, the top of the line model from the 6-Series coming with rather the same power output as the X6 M.

As expected, a power kit under the hood requires some preparations prior to the installment. This means that the BMW M6 Coupe has received new suspension and braking systems, 21-inch Hurricane RR-forged alloy wheels as well as titanium exhaust system with a 23kg weight loss, which improves the soundtrack. Also, the model can be had with the optional carbon tailpipes.

Once prepared, this M6 Coupe is ready for some action. The massive 4.4-liter twin-turbo engine comes with a stock 560 horsepower and 680 Nm of torque, but thanks to the tuner`s Stage 1, this lad here is capable of churning out 650 horsepower and 830 Nm of torque. The Stage 1 comes with the Bi-Tronik 5 power module and ECU remapping. 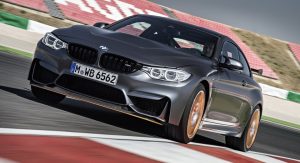