BMW will launch the G30 BMW 5-Series somewhere in 2016 with the model to be built at the Magna Graz factory, in Austria, with around 70,000 vehicles to leave the factory each year. Along with the stock version, the long-wheelbase China model will be also manufactured in Shenyang factory.

BMW recently launched the 2016 BMW 7-Series, well-known for its “35 platform” which is now called the CLAR platform, the same one that the 5-Series will be using too, along with the 3- or 6-Series. This means that the entire structure will use lightweight materials like carbon fiber or aluminum, which will make the G30 3-Series much lighter.

Along with the weight loss, the G30 BMW 5-Series will prove to be more efficient in terms of driving dynamics as well as more performance under the hood.

And since we are at it, the G30 BMW 5-Series will come with a wide array of three-, four- as well as six-cylinder units under the hood. For instance, the 520d and 525d will be powered by a 2.0-liter four-cylinder, with 231 horsepower, while the 528i will output a higher 272 horsepower. The 518d will come with a power output of 150 horsepower. 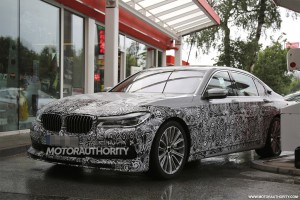