The BMW 2-Series Convertible is ending up in our news again, after the model was showcased in an impressive photo gallery last week in Texas, while exploring the beautiful scenery in Austin. The carmaker has brought the 2-Series Convertible at the 2015 Chicago Auto Show, for an official public display, revealing its fine dynamic design cues and slung silhouette.

The BMW 2-Series Convertible was officially unveiled during the 2014 Paris Motor Show, last year in October, the model coming with a lot of goodies in terms of visuals and performance, while inside, the sports car is also tweaked with a lot of safety gizmos. But the most outstanding part at the model, is the array of engines it will come with.

I am talking here about seven engines being fitted on the BMW 2-Series Convertible in Europe, starting with the petrol ones, like the 218i standard, which fits a 1.5-liter three-cylinder unit with 134 horsepower, closely followed by the 220i, with its 2.0-liter four-cylinder, developing 184 horsepower and 270 Nm of torque. The xDrive can be also an option for the 228i, which basically develops 245 horsepower and 350 Nm of torque, for the same 2.0-liter engine. 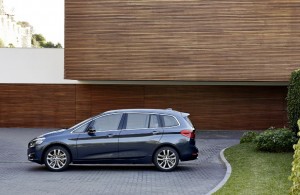