The new BMW 2-Series Active Tourer has received its first unveil at the 2014 Geneva Motor Show, with two fresh premiere changes like front-wheel drive and first MPV to be launched.

If we take a closer look at the pictures, the BMW 2-Series Active Tourer looks quite similar like the Ford B-Max, having an angular rear and back headlights resembling the new MINI, but being longer than the 1-Series.

The MPV will feature a five-seat version, with an extended 2-seat to be enhanced next year. The BMW Active Tourer has a split rear seats, allowing the possibility for its passengers to carry large objects between.

Apart from the entry-level, the model will also come in the SE, in the Sport, the Luxury and the M Sport trim levels, with the latter being launched in 2015.

As for the range of the engine, the BMW 2-Series Active Tourer will come with the 218i, being powered by a 3.0-liter petrol developing 136 horsepower and 220 Nm of torque.

Its colleague 225i xDrive, will sport a 2.0 petrol engine, developing 170 ponies, while the 218d Active Tourer will be sporting a turbocharged common rail diesel, generating a good 150 horsepower and 330 Nm of torque. 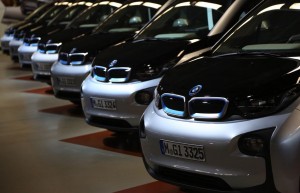