The UK`s Mini is on the move for the 2014. The car manufacturer, operating under the BMW`s platform is refreshing its lineup. With the new Mini F56 being rolled-out in 2014, the company is already reconfiguring the classic three-door hatchback into the fresh F55 5-door.

There were some photos with an F55 prototype spied the other day, on a tarmac in Amsterdam, perhaps being ready for an overseas flight. The five-door still has the same short rear doors with convenient use for passengers and storage area.

Sources state that the F55 5-door model is relatively larger, with a longer wheelbase, due to BMW UK platform.

Also very important to be noticed would be the new BMW three-cylinder turbocharged engines, which will equip all Cooper and Cooper D models.

The other models, like Mini Cooper S followed by John Cooper Works and Cooper SD will still be powered by four-cylinder turbocharged engines.

Other than power, the new Mini F55, aside the fuel efficiency, will also be able to offer high-tech assistance systems and infotainment package, ranging from the Head-Up Display to the Parking Assistance and also Active Cruise Control. 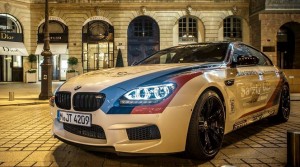